Whether you grew up hiking and hunting or you’re just venturing into the backcountry for the first time this spring, a few basic self-sufficiency skills are just as important as any piece of gear. If you’re more than a few miles or a few hours from medical help, it’s important to know how to deal with some of the most common wilderness injuries. Thankfully, New Mexico is rich in resources to educate all of us on better risk management. Join the Economic Development Department and its Outdoor Recreation Division (ORD) for this month’s Dispatches from New Mexico speaker series. The March event — co-sponsored by Base Medical, Western New Mexico University’s Center for a Sustainable Future and Outdoor Programs, Cottonwood Gulch, and the Rocky Mountain Youth Corps – will educate participants on how to mitigate risk when getting outdoors and the best resources to continue your backcountry education.

Pecos, NM: Friends of the Pecos National Historical Park is pleased to announce our selection as a finalist for the 2020 Outdoor Equity Fund. 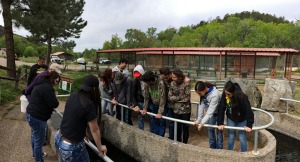 conservation and river ecology through the sport of fly fishing.  The program will provide an in-depth learning of the sport of fly fishing and incorporate the importance of climate change, resource conservation, river stewardship and ecology on the ecosystem that impacts New Mexico native, wild and stocked trout species.  With the partnership of the Pecos Independent School District, Truchas Chapter Trout Unlimited, the National Park Service and New Mexico Game & Fish Angler Education, the program will combine classroom and outdoor recreational activities throughout the school year, culminating in fly fishing outings at various local publicly accessible areas on the Pecos River.

The New Mexico Outdoor Recreation Division (ORD), a division of the N.M. Economic Development Department (EDD), announced the inaugural award recipients of the Outdoor Equity Fund (OEF). The first-of-its-kind OEF was created to allow all youth equitable access to the outdoors. The grant will support transformative outdoor experiences that foster stewardship and respect for New Mexico’s land, water, and cultural heritage

The Friends of the Pecos National Historical Park is an independent non-profit organization dedicated to supporting and assisting the mission of the park.  For more information, visit our website at www.friends-pnhp.org, or on Facebook www.facebook.com/PNHPfriends.

Pecos, NM:  Beginning this week, Pecos National Historical Park staff along with an American Sign Language crew from the Rocky Mountain Youth Corps will begin work on 6,000 feet of fence line along the northern boundary of the park. Crews will be repairing and stabilizing sections of fence, freeing fence line of vegetation, and replacing it with wildlife-friendly fence. Park property boundaries will also be clearly demarcated.

The public can expect to see work crews along the northern boundary of Pecos National Historical Park from the San Miguel County Sheriff’s Posse-Pecos Division Rodeo Grounds all the way out to Glorieta Creek and Old Denver Highway.  Work will take place July 7th through July 28th and then again from August 31st through September 28th.

Pecos, NM: Pecos National Historical Park has cancelled this year’s Feast Day at Pecos Pueblo in an effort to support federal, state, and local efforts to slow the spread of the novel coronavirus (COVID-19) and to adhere to the latest guidance from the Centers for Disease Control and Prevention (CDC).

Feast Day at Pecos Pueblo, which usually takes place every August, represents the fulfillment of a long-standing promise.  Before leaving Pecos Pueblo in 1838, the last inhabitants of Pecos Pueblo entrusted a special painting to St. Anthony’s Parish in the Village of Pecos. This portrait depicts the patron saint bestowed upon the Mission of Pecos in the 1620s. This year would have marked the 50th anniversary of the local community fulfilling its promise to perpetually honor the saint by celebrating a feast day mass in the remains of her final church.

Northern New Mexico – A new National Park Service (NPS) report shows that 255,637 visitors to Bandelier National Monument, Fort Union National Monument and Pecos National Historical Park in 2019 spent $16,113,000 in communities near these parks. That spending supported 231 jobs in the local area and had a cumulative benefit to the local economy of $20,661,000.

“The National Park Service has been slowly and safely increasing access to Bandelier National Monument, Pecos National Historical Park, and Fort Union National Monument, three parks in the national system of parks in the local Santa Fe area that support individual and collective physical and mental wellness,” said Pecos National Historical Park Superintendent Karl Cordova. “We welcome people back to these parks and we are excited to share the story of these places and the experiences they provide. We also feature these parks as a way to introduce our visitors to this part of the country and all that they offer.”

The peer-reviewed visitor spending analysis was conducted by economists Catherine Cullinane Thomas of the U.S. Geological Survey and Lynne Koontz of the National Park Service. The report shows $21 billion of direct spending by more than 327 million park visitors in communities within 60 miles of a national park. This spending supported 340,500 jobs nationally; 278,000 of those jobs are found in these gateway communities. The cumulative benefit to the U.S. economy was $41.7 billion.

Lodging expenses account for the largest share of -visitor spending, about $7.1 billion in 2019. The restaurant sector had the next greatest effects with $4.2 billion in economic output. Motor vehicle fuel expenditures were $2.16 billion with retail spending at $1.93 billion.

To learn more about national parks in New Mexico and how the National Park Service works with New Mexico’s communities to help preserve local history, conserve the environment, and provide outdoor recreation, go to www.nps.gov/newmexico.

About the National Park Service. More than 20,000 National Park Service employees care for America’s 419 national parks and work with communities across the nation to help preserve local history and create close-to-home recreational opportunities. Learn more at www.nps.gov, and on Facebook, Instagram, Twitter, and YouTube..

Many of us frequently drive by the historic Kozlowski trading post on NM-63 between Pecos and Rowe.  For the past year this pink adobe building has been undergoing a transformation, from an idle building alongside the highway to a wonderful new Pecos National Historical Park improvement that will soon be available to the public.

Pecos, NM: Pecos National Historical Park will host the annual Feast Day celebration at Pecos Pueblo on Sunday, August 11th. Join in a time honored tradition as community members from the Pueblo of Jemez and Pecos celebrate Feast Day mass inside the ruins of Our Lady of the Angels ofPorciúncula (Nuestra Señora de los Ángeles de Porciúncula). Following the 9:30 a.m. mass, the Feast Day celebration continues with traditional dancers from the Pueblo of Jemez and fresh rolls from the horno.  Dances are expected to begin late morning; photography is permitted. 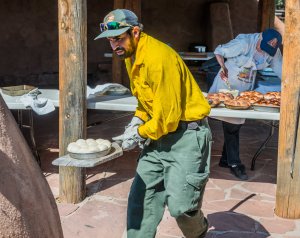 Feast Day at Pecos Pueblo represents the fulfillment of a long-standing promise.  Before leaving Pecos Pueblo in 1838, the last inhabitants of Pecos Pueblo entrusted a special painting to St. Anthony’s Parish.  A symbol of the pueblo’s adoption of Christianity as another form of religion, this portrait depicts the patron saint bestowed upon the Mission of Pecos in the 1620s.  Every August, Pecos village fulfills its promise to perpetually honor the saint by celebrating a feast day mass in the remains of her final church.

For more information contact Pecos NHP at (505) 757-7241 or visit www.nps.gov/peco. You will also find our listings on the New Mexico True website (newmexico.org) and Tourism Santa Fe (santafe.org). Please like us on Facebook at https://www.facebook.com/PecosNHPnps or Instagram(https://www.instagram.com/pecos_nps).

Meet up location at Monastery Lake

Donuts and coffee will be served

Team assignments (or form your own), safety briefing, clean up supplies.

For updates: the Upper Pecos Watershed Association on Facebook