Do you know the true story of the Gettysburg of the West? 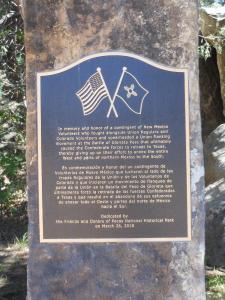 A local organization, The Friends and Donors of Pecos National Historical Park, was able to have a Historical Monument created that honors the New Mexico Soldiers and Volunteers who participated in the Civil War Battle at Glorieta. The following is a brief summary of the story behind the plaque.

These Confederate Forces then captured Santa Fe on March 10, 1862. The capital had been moved earlier from Santa Fe by the New Mexico territorial governor, the honorable Henry Connelly, to Las Vegas, New Mexico. Following these battlefield successes, the Texas Confederate Forces planned to conquer Fort Union and then march to Colorado to take over the mines located there.

From there, the Forces intended to form an alliance with the Mormons and together take over the gold fields of California, which would have provided much needed capital for the Confederacy; and the conquest of California would have additionally provided two sorely needed ports, free of union blockades.

The fulfillment of their plans would have severed the Western Territories from the Union and strengthened the position of the Confederacy. They next planned to take over the Mexican States of Lower California, Sonora and Chihuahua, which had the potential to gain much needed recognition by foreign countries.

The Texas Confederate Forces were met in a skirmish and fought two battles with the Union Forces at Glorieta Pass on March 26 to 28, 1862, and even though the Confederate Forces were victorious in these two battles, they were forced to abandon their dream of taking over Fort Union and conquering the West when their supply of sixty to eighty wagons, loaded with weapons, medical supplies, food and blankets, was burned and four hundred mules and horses were captured by a Contingent of United States Regular Army Forces from Fort Union and Volunteers from Colorado and New Mexico.

After this tremendous loss, the Confederate Texans had no other choice but to abandon General Sibley’s dream and retreat back to Santa Fe, then to Albuquerque and eventually out of New Mexico and back to Texas. This turning point in the Confederate campaign
in New Mexico, the Battle of Glorieta Pass, is referred to by some historians as the Gettysburg of the West.

Although the loss of men killed, wounded or missing in the Civil War battles fought in New Mexico may seem insignificant compared to the carnage of the Civil War battles that were fought in the East and South, the importance and significance of this battle cannot be overstated, as the ultimate outcome helped hold the Union together and assured its survival in what we now know as the United States of America. 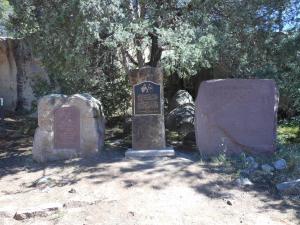 This newly erected monument honors Lieutenant Colonel Manuel Chavez and the New Mexico volunteers who participated in the battle of Glorieta pass on March 26-28, 1862. Prior to this, apparently due to prejudice, no mention was made of the local Mexican Americans who valiantly fought, and then guided Chivington up to Johnson’s Ranch to destroy the wagons, and then guided him safely back to Kozlowski’s Ranch. This new monument is located at the Glorieta pass battlefield site in the immediate vicinity of the current monuments honoring the Colorado volunteers and the Texas volunteers.