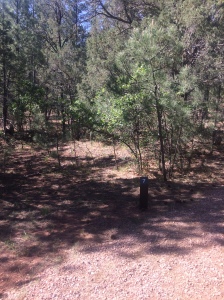 Here at the base and lower slopes of Artillery Hill, Colonel Slough stationed Companies D and K of the First Colorado Volunteers during the main phase of the battle.  From behind the rock formations and trees, these Union infantrymen played a key role in stopping the two fierce Confederate attacks against the center of the Federal line.  Company D took especially heavy casualties in repulsing the strong Texan assault.