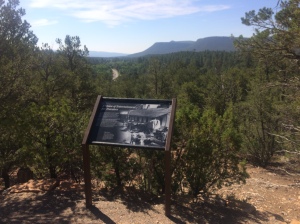 Here you see the Glorieta Battlefield as Lt. Colonel Scurry saw it during late afternoon of March 28, 1862.  On the left is the Santa Fe Trail (today’s NM 50).  Beyond it a large rock formation marks the northern end of the Union line, some 300 yards from where you stand is is Pigeon’s Ranch.

Sharpshooter’s Ridge is immediately north of the Pigeon’s Ranch building that still stands today.  A low adobe corral wall ran southward from the base of Sharpshooter’s Ridge.  Artillery Hill to your right had a three-howitzer battery near its crest and the Colorado volunteers around its base.  From this area, Lt. Colonel Scurry sent Major Shropshire to attach the Union left around Artillery Hill.  Majors Charles Pyron and Henry Raguet were dispatched to assault the enemy north of the Santa Fe Trail.