The Battle at Pigeon’s Ranch – Overview of the third day of the Battle of Glorieta – Friday, March 28th

On the morning of March 28th, the third and final day of the Battle of Glorieta, both sides moved toward each other.  With about 900 men.  Confederate Lt. Colonel William Scurry left Johnson’s Ranch and traveled east alone the Santa Fe Trail.  Slough’s Union forces left Camp Lewis near Kowslowski’s Stage Stop and proceeded west along the same trail.  The two forces met where you are today.

You are standing on Artillery Hill. Today, the old Santa Fe Trail in this vicinity is covered by NM Highway 50.  The highway passes the remains of Pigeon’s Ranch, a hostelry catering to commercial travelers in the 1860s.  The ranch’s surviving building is over the hill to your forward right.  Early on March 28th, 1862, Union and Confederate pickets encountered each other. 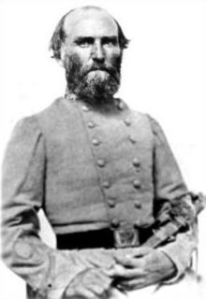 Scurry and his Confederate soldiers dismounted and joined the Fourth Texas foot-soldiers, advancing eastward along the trail.  Colonel John P. Slough, leader of the First Regiment of Colorado volunteers, brought up the Union’s artillery and formed a battle line across the trail.   This first contact of the battle lasted only a few minutes.

The Union forces fell back to a stronger position to the north west of Windmill Hill after a failed flanking maneuver.  The Confederates established a similar line, strengthened by three artillery pieces.  The Union countered with four mountain howitzers (see Marker 7 and 8).  This phase of battle lasted three hours. 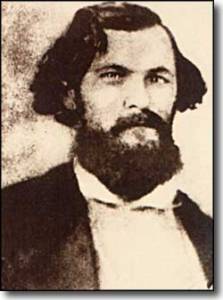 The Confederate vanguard was able to outflank the Union line (to the south, just across Interstate 25). In response Col. Slough withdrew to a second defensive position, just west of Pigeon’s Ranch, strengthened by four pieces of heavier artillery.  His infantry and dismounted cavalrymen formed the right and left of the Union line along the ridge north of the ranch and around Artillery Hill.

A brief pause in the fighting allowed Lt. Colonel Scurry to reorganize his Confederate forces and plan an assault on this new Federal line.  At about 2 p.m., the battle was renewed.  On the Confederate right, Major John Shropshire marched his men around the Union line.  Shropshire then led a charge on the wooded areas to your right, and was killed. 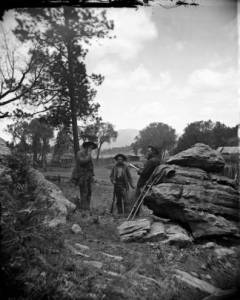 The Confederates outflanked the Union forces north of Pigeon’s Ranch, and the Federal commander ordered his men to fall back to a third defensive line a mile east of Pigeon’s Ranch, ending the main phase of the Battle of Glorieta at about 4:30 p.m. (see more information on Marker 12).